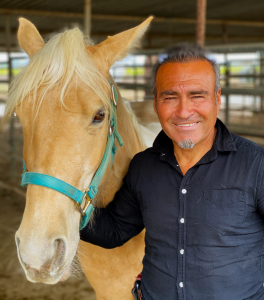 Domenico Sumonte considers himself more of a horse-Man than a horse trainer. I’m lucky enough to have an arena at the End of The Road Ranch where I can work my horses. One trainer that works out of this barn is Domenico Sumonte. In between working our horses, Dom and I struck up a friendship. In our casual conversations, I quickly learned Dom has experienced an exciting life with horses. I wanted to learn more about his life and philosophy.

Dom is a self-taught horseman. He builds a relationship with a horse first. One technique Dom uses is to get the horses out on the trail first. The ag fields around the ranch provide a great working area. There is farm equipment, trash, and other things that help him “sack out” his horse.

Riding is an adventure for Dom. Dom has ridden horses on the ancient roads of Rome. He has ridden in the mountains of Chile. One of Dom’s favorite rides was the Pacific Crest Trail between Los Angeles and the Mojave Desert.

I really love these conversations with interesting horsemen. Thanks Dom.

We want you to be a part of the show. Tell us about your horse. Share your challenges, triumphs, or just everyday items that make horse ownership unique. Create an audio file using the memo app on your phone. Or contact me and we’ll set up a time to talk on Skype or phone. Perhaps what you have to share can help someone in THEIR horse journey. 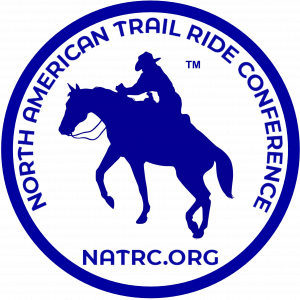 The NATRC sets rules and has guidelines for trail rides. Sanctioned NATRC rides judge riders on horsemanship and horse care. Their competitions place an emphasis on rider and horse safety. The conference establishes levels so riders can compete with others of similar ability. All horses, including mules, are eligible to take part in every ride. A competitive trail ride is not a speed event. Riders have to manage the course and speed to arrive at checkpoints within a certain time frame. Horses have mandatory breaks and veterinary checks to insure they are fit to continue. Riders can also expect to be judged negotiating natural trail obstacles during a ride.

Links to Competitive Trail Riding Heard in this Episode 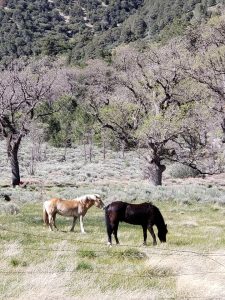 We want you to be a part of the show. Tell us about your horse. Share your challenges, triumphs, or just everyday items that make horse ownership unique. Create an audio file using the memo app on your phone. Or contact me and we’ll set up a time to talk on Skype or phone. Perhaps what you have to share can help someone in THEIR horse journey.

Friends and I explored the Stallion Springs area of the Tehachapi Mountains in Central California. There is plenty of room for your horse trailer at the intersection of Horse Thief and Mustang, called Buckskin Park. You’ll find a few horse pens, hitching posts, and picnic tables to enjoy. From here (our elevation was about 4,000 feet), you can horseback ride in a couple of directions. Some trails are alongside the streets, but the residents are very respectful of horseback riders and take care.

At the time of this video, some trails needed maintenance, but that won’t always be the case. Stallion Springs Trail Maps: https://www.stallionspringscsd.com/equestrian-hiking-trails 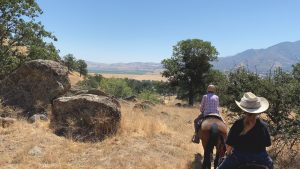 There were five of us riding on this outing.  Two of the people knew the area well.  Stallion Springs, and the Tehachapi area is a very horse-friendly.  While we ride through residential areas, the lots are big and far apart.  There are lots of oak trees.  I believe there are five distinct types of oaks in the area.   As we rode through one area, a group had labeled many of the plants.

Most of the group drove from places with a little elevation.  Scratch lives at 500 feet.  I found he was huffing and puffing going up the hills.  The temps can reach the high 80s in the summer.  At that elevation, it feels even warmer.

As we wound around the mountains, magnificent vistas of the Tehachapi valley would emerge.  Then, we would turn around another corner and trees and mountains surrounded us.

Wildlife and the Old Golf Course

Real estate in the area took a hit a few years back.  As a result, the Stallion Springs golf course lost its owner.  It’s overgrown now.  Golfers knew the course for its fast greens and rocky terrain.

We saw a few deer from the trail.  Two elk walked through Buckskin Park as we unsaddled.  There have been some reports of rattlesnakes in the area.  Keep an eye out.

Vasquez Rocks ~ Ride Your Horse On Another Planet 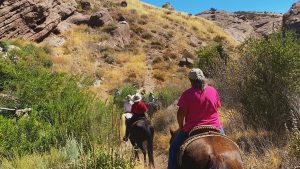 Tucked away in the little city of Agua Dulce, just off the 14 freeway in Southern California, are Vasquez Rocks.  Vasquez Rocks got its name from the bandit Tiburcio Vasquez.  Some have characterized Vasquez as a Robin Hood, while others have made him out as a womanizer.  Most agree he lived outside the law.  When he allegedly killed some men near Hollister, California, his gang rode to Southern Cal to escape capture.  For a time he hid in the area that now bears his name.  He eluded capture by using the rock formations and caves to hide.

In the 1930’s, a movie director suggested Vasquez Rocks as a shooting location for Tibet.  This was the beginning of a new relationship with Hollywood.  Og course it was a favorite setting for Westerns.  The Texas Ranger (1931) and the Gambler (1939) used the rocky back drop to simulate the Old West.

In 1967, Vasquez Rocks got its big break in Hollywood.  The crew of the Enterprise landed right in its backyard.  It was used to fight the Gorns.  They also used the rocks in the movie production of Star Trek IV as the planet Vulcan.

Our Ride to Vasquez Rocks

It has shortened the park hours because of COVID.  But, because the Pacific Crest Trail runs through the park, you can get in through those entrances.  There’s parking on Escondido Canyon Road.  They charge no admission to get into the park.

If you go in the summer, it can get warm so leave early.  It wouldn’t hurt to take water and a light snack.  There are some trail maps to follow.  For most of our ride you could often see the 14 Fwy. on one side or the houses on the other.  It really helped with orientation.  The terrain can be rock in places.  If your horse has tender feet, I would suggest boots. 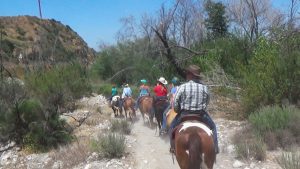 Working on my Video Channel

I’ve had a YouTube Channel for 12 years now.  Back in 2008, I began shooting experiences with my mare Jessie.  The very first video was of us working cows.  A lesson my wife bought us for my birthday.

Through the years, I’ve chronicled many of our rides and adventures.  Video editing software was difficult to use back then.  I wasn’t very good at either shooting or editing.  Over the last two years, I’ve studied video editing and production.  I’ll admit, it’s still scary in front of the camera.  But I have a desire to share our knowledge and experiences, and this is the best way.

My goal is to shoot quality videos of trail rides, travel, horse training, and things-you-should-know.  As difficult as it is to be behind the camera and on top of a horse, I’m trying it.  I hope you’ll subscribe to my channel and offer feedback and suggestions.

Several years ago we did an ETI Trail Trial at Hansen Dam Recreational Area in Lakeview Terrace, California.  It was my first experience with an ETI trial and we had a lot of fun.  Hansen Dam is easy to get to.  Just off the 210 Freeway near Sylmar, there is ample parking for a group of trailers.

Gabrielino Equestrian Park is located there.  A warm-up arena with good footing is next to the parking lot.

Different sections of the area offer different trail rides.  In one section there is thick growth with many creek crossings.  In other areas there is rocky, almost desert -like terrain.  Our ride took us through both areas.  We had an experienced guide, but if you’re good with directions, it would be difficult to get lost.  The 210 freeway is visible from almost anywhere, and we use it as a landmark.

On one of our trail rides there, we rode under the freeway, up Little Tujunga Canyon, to a food truck is in the middle of a nursery.  It’s called the Hideaway Cafe Food Truck.  It serves good Mexican food and there is a place to tie up your horse. 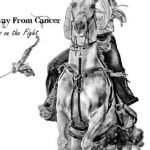 Breakaway From Cancer Today we are doing something a little different. Often, I get requests from someone to be on the show. They have a good book, a new piece of tack, or a good cause. There's not enough content for an entire show, but it's worthwhile information I think you's like to know. Since I'm producing a long version every other week, I thought I'd experiment with a short podcast in between. Let me know what you think. Beth … END_OF_DOCUMENT_TOKEN_TO_BE_REPLACED