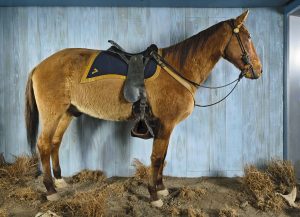 Janet Barret wrote a fascinating book about Comanche, the sole surviving horse of the Battle of Little Big Horn.  The story begins with Captain Myles Keogh an Irish immigrant who was a soldier for hire.   After riding for the Pope in Italy, he came to America to fight in the Civil War.  After much research, Janet pieced together the life of Captain Keogh and the story of how he gained Comanche.   Titled, Comanche and his Captain, The Warhorse and the Soldier of Fortune, the book is available on Amazon.

You may remember Janet from a previous podcast about They Called Her Reckless, the story of a Korean Warhorse.  A dedicated author, Janet tells the story of Comanche after delving into volumes of research, stories, and anecdotes about the Battle of Little Bighorn.  Because the only survivors were Indians, the details of the actual battle are often difficult to determine.  That’s not to disparage Indian storytellers, only to say that the details they relayed were heard weeks after the actual battle, then passed on through newspaper editors who were trying to sell papers.   But, Janet cuts through all that and lays out a wonderful story of a Mustang horse named Comanche.

Links Heard in the Comanche Show

Comanche and his Captain, The Warhorse and the Soldier of Fortune

They Called Her Reckless

We want you to be a part of the show.  Tell us about your horse.  Share your challenges, triumphs, or just everyday items that make horse ownership unique.  Create an audio file using the memo app on your phone.  Or, contact me and we’ll set up a time to talk by Skype or phone.  Perhaps what you have to share can help someone in THEIR horse journey.

You are a big part of why we do this podcast.  We really love getting your feedback.  Please let us know your thoughts, ideas, and suggestions for the show.  Email us at John@WhoaPodcast.com 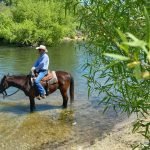 We're Taking a COVID Hiatus Hi everyone.  I hope you are doing well.  This COVID pandemic has really turned everyone's world upside down.  Somehow, I think horse people take these things a little better.  When you sit on a 1,000 lb animal, sometimes things go wrong.  It's you and the horse and you learn to deal with them.  We get manure under our fingernails and horse slobber on our shirts.  We clean water troughs brimming with algae.  We know … END_OF_DOCUMENT_TOKEN_TO_BE_REPLACED