Home » Inspiration » Page 22
Jessie and I work through the first eight exercises in Clinton Anderson’s Downunder Horsemanship Gaining Respect and Control on the Ground, Series I, DVD. This is the video that started it all back in 2007. I wanted to know if a regular guy like me, who had a limited knowledge of horses (and no knowledge of horse behavior) could utilize a learn-by-watching-dvd system to train a horse without killing himself. It turns out it can be done. We followed the methods described on the videos as closely as we could and Jessie became a solid, respectful, and safe trail horse.  The Clinton Anderson Method is laid out simply in these dvd’s.  We simply started at the beginning of Gaining Respect and Control on the Ground with exercise 1.  Once we felt we had accomplished that we moved on to number 2.  Before long I had a trusting quiet horse and learned a great deal in the process.
Working at liberty is always a fun challenge. Jessie has improved a lot over the last few months. Looking back I didn’t really do a very good job of starting her off at liberty very well and had to come back and work really hard to have her “hook up” with me. We still have a long way to go. Compare to the first one seven months ago.
Ranae’s good friend Susan remembered Ranae saying she had always wanted to ride a Friesan horse. Susan contacted and owner of several Friesans in Norco, Ca and arranged to have one of Ranae’s dreams come true for her birthday. While I thought I was just going along to document the wonderful event, I ended up getting to ride one as well! What an experience! 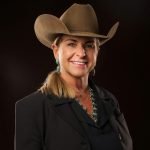 AQHA Horse Show Judging with Patti Carter If there are no judges, there are no horse shows. The judge can make or break a horse show experience. Because they are essential to competition, I thought it would be good to talk with an experienced judge. Patti Carter is the Senior Director of Judges at the AQHA (American Quarter Horse Assn.). AQHA certifies over 800 judges and Patti oversees them all. She is in charge of educational programs, testing … END_OF_DOCUMENT_TOKEN_TO_BE_REPLACED