Home » Gaining Respect and Control On The Ground – Series I
Jessie and I work through the first eight exercises in Clinton Anderson’s Downunder Horsemanship Gaining Respect and Control on the Ground, Series I, DVD. This is the video that started it all back in 2007. I wanted to know if a regular guy like me, who had a limited knowledge of horses (and no knowledge of horse behavior) could utilize a learn-by-watching-dvd system to train a horse without killing himself. It turns out it can be done. We followed the methods described on the videos as closely as we could and Jessie became a solid, respectful, and safe trail horse.  The Clinton Anderson Method is laid out simply in these dvd’s.  We simply started at the beginning of Gaining Respect and Control on the Ground with exercise 1.  Once we felt we had accomplished that we moved on to number 2.  Before long I had a trusting quiet horse and learned a great deal in the process. 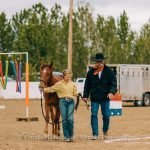 Devils Garden Mustangs with Laura Snell Laura Snell knows a lot about the Devils Garden Mustangs and their Herd Management Area.  She is a Livestock and Natural Resource Advisor for Modoc County.  Laura works with the US Forest Service helping with research and management of the herd. I thought the BLM managed the wild mustangs, then learned several agencies involved.  The Devils Garden is on Forest Service Land and is the largest herd … END_OF_DOCUMENT_TOKEN_TO_BE_REPLACED