When I had the opportunity to interview Darley Newman, Producer of the Emmy Award winning travel show on PBS Equitrekking, earlier this year, I jumped at the chance.  Darley has a wealth of knowledge and a life of adventure as she travels the world looking for places people can enjoy with horses.  I asked Darley for an article my readers could use to plan an exciting vacation.  Darley came up with three great national parks where you can experience the wonders of nature from the back of a horse.

Being a conservation minded traveler and horsewoman, I relish the chance to explore America’s wild spaces on horseback and have been privileged to ride and film in many of our great National Parks as I travel the world for my TV show Equitrekking®. Horseback riding is a great way to experience the remarkable landscapes, wildlife and adventures in National Parks as far flung as Maui and as close to home for me as North Carolina.

There are many advantages to seeing these natural spaces on horseback. Riding horses, you may feel more at tune with nature and the environment. By riding with local guides, you can learn things that aren’t in the guidebooks and not published on the internet, like the horse traditions of the Cherokee in the Great Smoky Mountains or the Navajo in Canyon de Chelly. I also really like being able to share my adventures with an equine friend.

Here are several wonderful parks through which I’ve been fortunate to ride that you can saddle up to explore as well. 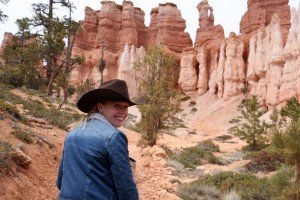 It helps to have a good equine partner for any trail riding, but especially in areas that are new to you with challenging terrain. In Bryce Canyon National Park, one of my favorite National Parks, I was paired up with a veteran mount named “The Kid,” a 10-year-old black Quarter Horse Thoroughbred Cross who knew the trails well. As you descend into the canyon on the Rim Trail, there’s a drop off on the other side that can make a rider nervous. The Kid gave me confidence as we descended amid the wild hoodoos that define Bryce’s landscapes.

Hoodoos are pinnacle shaped rocks that have been sculpted away by the elements over time. Abundant in Bryce Canyon, part of the fun of riding here is picking out shapes within the eclectic hoodoos. My guide Tawn, who’d ridden the Rim Trail countless times, had his own vision for each formation we spotted, including boats, seals and castles. Hearing Tawn share stories of local myths and legends, brought the hoodoos of Bryce to life.

Paiute Native Americans, who lived in the area for centuries called the hoodoos of Bryce, The Legend People, believing that they resembled people who had been turned to stone as a punishment for bad deeds. 19th century settlers, who harvested timber in the canyon, had other ideas about the maze-like formations of hoodoos. 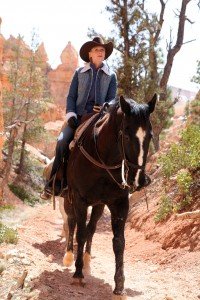 Some of these weathered rock spires tower as high as a ten-story building. Riding here, you’ll often look up, so packing sunglasses or having a brim on your riding helmet is a good idea. The skies were a beautiful bright blue for the first half of my day of riding in Bryce. Exceptional air quality, along with the park’s isolation from development and high elevation, can grant over 100 miles of views.

You’ll want to be prepared for the changing altitudes in Bryce. In particular, keep yourself and your horse well hydrated. Pack layers, because the weather can change quickly. While I started the day with blue skies, I ended it with massive cloud cover. 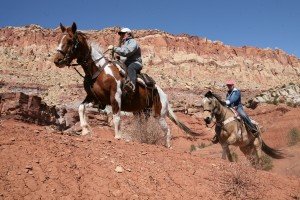 Often overlooked for Bryce and Zion, Capitol Reef National Park in South Central Utah is a great place to discover on horseback, especially if you can ride out with local outfitter Pat Kearney, who has a vast knowledge of the land and its history. Less visited than some of the other U.S. Parks, Capitol Reef showcases dramatic geology and history, much of which is unreachable by modern roads.

The park’s dome-shaped cliffs and canyons have been compared to the U.S. Capitol, granting the park part of its name. These tall sandstone cliffs have created a barrier to travel, just as a reef is a barrier for sailors, so the park is aptly named “Capitol Reef.”

Large sandstone canyons reveal the earth’s geologic progression, defined in the Waterpocket Fold, almost 100 miles where layers and layers of earth have been thrust upwards, collapsing over each other. This fold in the earth occurred tens of millions of years ago, perhaps when the continental plates were colliding to form the great Rocky Mountains. 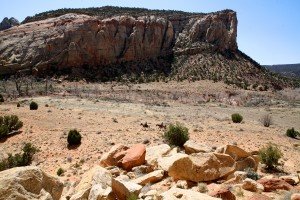 Riding horses may put you in the mindset of some of the famous outlaws who are thought to have hidden out in Capitol Reef, like Butch Cassidy or the cowboys of the 19th and 20th centuries who used the land here as winter grazing areas, camping out for weeks at a time. Rock art in the form of petroglyphs also sheds light on the park’s human history. The Fremont people, a group of hunter-gatherers lived in this area from around the 7th to the 14th centuries. Later in the 1800’s Morman settlers would form a tight community here, using the Fremont River to sustain life. Their orchards and the old one room schoolhouse still remain.

If you want to explore Captiol Reef National Park on horseback, you can book a camping or inn to inn ride with Pat Kearney (http://www.equitrekkingtravel.com/destinations/view/utahs-canyonlands-national-parks-horseback-riding/ )or bring your own horse. Check the National Park Service website for the most up to date information. (http://www.nps.gov/care/planyourvisit/horsepack.htm) Currently, overnight camping is only allowed for horses and riders with advanced reservations within the Post Corral at Equestrian Staging Area in the Waterpocket District. 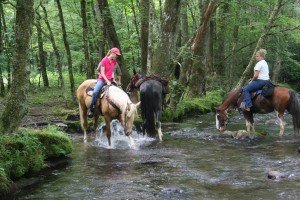 The most visited of our national parks, the Great Smoky Mountains National Park rests along the border of North Carolina and Tennessee in the Southern Appalachian Mountains. There are several horseback riding stables in the park that lead visitors on guided rides or you can bring your own horse. There are around 550 miles of trails open to equestrians in the park and dozens of backcountry horse camps, making for abundant and diverse trail riding. The park also boasts wondrous biological diversity and is designated as an International Biosphere Reserve by United Nations.

Forrest Parker and members of the Eastern Band of Cherokee Indians guided my ride through the Great Smoky Mountains, telling me the history of the Cherokee in these mountains and making the riding experience much more intimate. It was a plus to ride smooth Tennessee Walking horses here, as some of the trails can be steep, rocky and narrow.

On our outing, I found an abundance of shade and water, which made for easy going on the horses. We passed by beautiful rushing streams, mossy covered boulders and colorful wild flowers, including blue phlox and the magnolia tree’s delicate white blooms. Though we had no encounters, there are an estimated 1,500 black bears that reside in the park boundaries.

History buffs may enjoy the park’s old log barns and houses, as well as at the nearby Oconaluftee Village, which replicates an 18th century Cherokee Village. In planning your adventures here, definitely check out the National Park Service website for the Great Smokies, (http://www.nps.gov/grsm/planyourvisit/horseriding.htm) which has more extensive information on riding and camping here, including the option to reserve horse camps online.

Darley Newman is the host and producer of the Emmy-winning Equitrekking TV show. She travels the world horseback riding with local people and sharing her knowledge of places you can ride, too, at Top20Ranches.com, EquitrekkingTravel.com and Equitrekking.com.

Listen to our Audio Conversation

Listen to our podcast with Equitrekking Travel Expert, Darley Newman on the Whoa Podcast about Horses and Horsemanship. 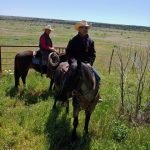 Inspiration with John Toli Something completely unexpected happened to John Toli.  John is a regular listener of the podcast and his story involves respected horseman Buster McLaury.  The whole story began with a vacation/horse clinic trip John took with his wife Lisa.  John didn't want to tell the story because he met a horseman and wanted to brag about.  He wants to tell his story to inspire others to say "yes" to opportunity.   John took a … END_OF_DOCUMENT_TOKEN_TO_BE_REPLACED