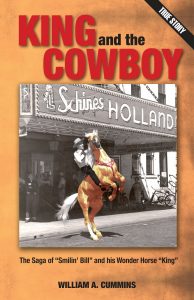 Cowboy Bill Cummins grew up in post-depression era Ohio with his father and four brothers.  His mother died when he was 15.  He nearly lost his fingers and thumbs when he was nine.  Bill dreamed of one day becoming a singing cowboy in the same vein as Gene Autry and the wit and wisdom of Will Rogers.

Bill worked with his family’s horses on their farm and a local stable owner noticed he had a special knack working with the horses.  Although he was only 15, the stable owner hired Bill to manage his stable and run his tourist trail riding business during the summers of Bill’s high school years.  One year a traveling horse stage show came to town.  Bill befriended the two main riders and trainers, Montana Frank and California Joe.  Meanwhile, the stable owner had a palomino stallion he thought would back a good stage performer.

The scene was set when the two trainers worked with the young horseman and his palomino and the result was Smilin’ Cowboy Bill Cummins and his horse King.  For five years the duo performed for audiences doing tricks and singing songs.  While Bill got to live his dream of being a singing cowboy, he got to perform for people all over the midwest.

Bill later went on to pursue a career as a civil engineer.  Then, later in life, in went into publishing and write several books.  At age 86, Cowboy Bill Cummins is an inspiration.

CAI Publishing – King and the Cowboy
Become a Patron!

There is a “Join Our Email” list at the top of this page.  Signup.  Occasionally, I’ll send you something useful you can use to build a better relationship with your horse. Thanks!

We have well over 100 episodes up now and you can find them all for free on iTunes, with our Android App in the Amazon store, and now Stitcher, or wherever podcasts are distributed.  Get the Stitcher app and tell us how it works.  We are on Google Play too!  You can also find every episode and more about the show at whoapodcast.com.  Please take a moment and join our email list. Get in on the conversation with Facebook and Twitter – just look for WhoaPodcast.

You are a big part of why we do this podcast.  We really love getting your feedback.  Please let us know your thoughts, ideas, and suggestions for the show.  You can email us at John@WhoaPodcast.com 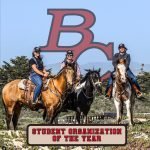 New Bakersfield College Rodeo Team Formed You'd think as big as an agricultural, beef-producing county as Kern is, there would be rodeos all the time. And, in reality, there are. We've got the Tehachapi Mountain Rodeo Association producing bull riding, youth, and PRCA rodeos. There's the Glenville Rodeo and the Sheriff's Posse Rodeo. We have a Bakersfield Youth Rodeo Club. But, with all that, there was no community college rodeo. That is until … END_OF_DOCUMENT_TOKEN_TO_BE_REPLACED