As part of a podcast production involving the Ojai Valley Cowboy School we had an opportunity to meet and chat with a fellow student, Bruce Freeman.  Bruce, we discovered is a winemaker and bottles Clos des Amis wines.  After a wonderful afternoon of horses and cowboys we sat around the fire.  It’s not often one gets the opportunity to chat with a winemaker and I asked for an interview.  Bruce was kind enough to tell us a little about his wines.  We tasted a little of the Chardonnay and it was wonderful.  For more information, check out Clos des Amis.com 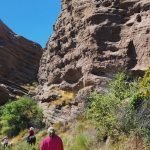 Vasquez Rocks ~ Ride Your Horse On Another Planet  Tucked away in the little city of Agua Dulce, just off the 14 freeway in Southern California, are Vasquez Rocks.  Vasquez Rocks got its name from the bandit Tiburcio Vasquez.  Some have characterized Vasquez as a Robin Hood, while others have made him out as a womanizer.  Most agree he lived outside the law.  When he allegedly killed some men near Hollister, California, his gang rode to Southern … END_OF_DOCUMENT_TOKEN_TO_BE_REPLACED