Campdrafting is one of the top disciplines in Australia.  It’s making its way across the pond and coming to Colorado.  A judging clinic, teaching clinic and a competition is coming to Kiowa, Colorado in August 2013.

From the US Campdraft Assn:  Campdrafting involves a mounted rider riding into a “camp” (corral or yard) which has six to eight head of cattle in it. The rider (cuts out) one steer or heifer from the cattle in the camp and brings that beast to the front of the camp.  The rider blocks and turns that beast at least two or three times to prove to the judge that they have the beast under control.  The rider then calls for the gates to be opened. The cut out is worth a total of 26 points. 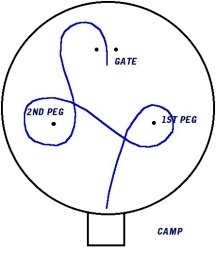 The rider then proceeds to draft (work) the beast around a figure eight course in a larger arena.

Generally the course is set to the left.  Once the beast has gone around the left peg, it must then be drafted around a peg on the right.

Once completed, the rider then guides the steer through the “gate” which is two pegs placed apart.  Once gated, the campdraft is complete.  The rider can be awarded up to a total of 100 points. Points are awarded for horsemanship and control of the beast…  The time limit is usually 45-47 seconds. 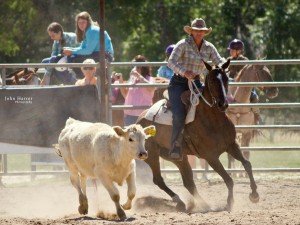 On today’s Whoa Podcast about Horses and Horsemanship we interview Mary Harris, President of the US Campdraft Association.  Mary tells us about the event.  We find how she started the organization.   She also talks about why she wanted to campdrafting in the US.  Later in the show, Pete Comiskey joins us via Skype from Australia and tells us about the inner workings of the clinic.  More to come on campdrafting USA.

Thanks for listening.  We would love to hear your thoughts on this episode.  Email us at john@whoapodcast.com 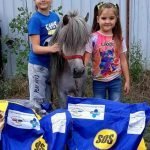 Horses in Ukraine Horses in Ukraine have gotten a raw deal. Ukraine, in Eastern Europe, is a beautiful country about the size of Texas. Wikipedia says Ukraine is a unitary republic with a free-market economy. (While I'm not sure what that means exactly, as an American, it sounds pretty good to me.) Then, Russia decided it wanted to own the Ukraine, and a war broke out. The conflict places thousands of horses in the middle. Well, all … END_OF_DOCUMENT_TOKEN_TO_BE_REPLACED