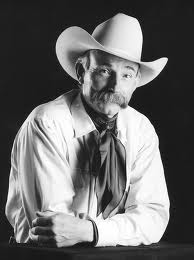 Back in the 1980’s, I had gone to the local community college and taken a couple of courses in radio production and board operation.  I pulled a short stint on the college radio station.  Then, I wanted to try my hand at being a “deejay”.  I contacted a couple of stations and no one would talk to me.  I came up with an idea.  I called the lowest rated country station in town and boldly asked for the program director.  When he picked up the phone I asked, “How would you like to give your air staff Christmas Day off?”

“How am I going to do that?”, he replied.  I knew he wanted be the good guy to his employees, so I told him I would work for him Christmas day IF he gave me a weekend shift in the new year.  He thought about it a moment and then told me to come down at midnight and spend some time with the overnight dee jay.  If I past muster with him, we had a deal.  After three or four nights working with Rick the overnight guy, I was pronounced ready.  Christmas Day, twelve-oh-one a.m. I flipped the mic switch and went on the air.  The program director had given me one instruction, “Try not to say too much.”  Well, on today’s show, I break that rule.

Today we have a very special show in a couple of ways.  First, we get to talk to Baxter Black, cowboy poet, writer, and well, cowboy.   And, I tell you how this interview came about.  If you’ve listened to this podcast in the past, you know I have a knack of getting myself in spots that are above my skill level.  This is one of those times.  It’s a story of reaching a bit far, maybe a little to far, and while stretching out there, losing track of one’s goals.  Anyway, no one died, and only one of us broke a sweat.  Here’s the story of what happened behind the scenes of the great Baxter Black Interview of 2014.  I hope you find it entertaining.

Baxter Black became a large animal veterinarian despite having poor grades.  He found his way onto the speaking circuit.  He wrote and performed commentary on National Public Radio.  He was on the Tonight Show with John Carson for heaven’s sake.  He learned how to entertain people and he does a good job at it.  Yeah, I know what your asking, “How did he end up on your show?”  While I wonder the same thing, I can tell you he is a generous man in terms of his time and patience.  I know, because I place a lean on both. 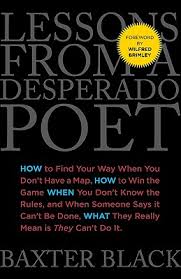 The book I talk about in the podcast is called Lessons From a Desperado Poet, subtitled How to Find Your Way When You Don’t Have a Map, How to Win the Game When You Don’t Know the Rules, and When Someone Says it Can’t Be Done, What They Really Mean is They Can’t Do It.  It could be called a self-help book, but that might be selling it short.  It is chalked full of good ideas and motivation.  And, it’s not just about business – it’s about life too.

I would have like to have had him do a poem or give us a little recitation of one of his commentaries, but I while I was talking with him I realized that would have been like asking someone over to your house for dinner, then asking them to cook.  I just could not do that.

Stay in touch.  It is easy.  Just put your name in the newsletter subscribe box at the top of the page.  As always, we are very interested to hear what you have to say about this episode.  You can email us at: john@whoapodcast.com And, if you have any comments or suggestions for future shows, please pass them along. Thanks for sharing these podcasts.  Our numbers are really growing and we owe it all to you, our loyal horse loving listener-ship.  You guys are the best!

Now listening to the show just got easier.  Help support the show.  Checkout our new Whoa Podcast Android App at the Amazon Store. 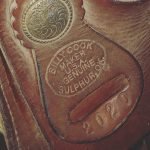 Billy Cook Saddles, A Tradition of Craftmanship Billy Cook Saddles have been around since 1953. Saddle making has always been a mystery to me. It's a craft, a skill. Working leather has so many aspects: tanning, cutting, stamping, sewing. A saddle maker needs to know all of these skills. He needs to know how to choose the leather too. When Billy Cook passed away in 2019 at the age of 89, it looked like his saddle business might die too. … END_OF_DOCUMENT_TOKEN_TO_BE_REPLACED